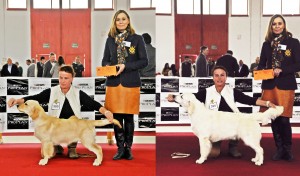 The two come from distant view, the two youngters, both winners in the national and international show of Granada. On one side “Slocum”, (Ch Stanroph Sailo Boy x Ch. Staneroph Stateliness de Terra di Siena), he itself is defined as a solitary navigator, the last scion of the mythical Sailor Boy. He shows character , presence, to be able to be, of this that it seems that the lesson is known without studying. And in the city of the Alhambra he appears with nonchalance to win Best of Breed and again on Sunday winning Best of Group 8. It is like a gift of birthday, which Terra di Siena celebrates in 2015 twenty years of breeding maturity.


By the way “Tiare” (Put Your Trust In Lady Luck to Terra di Siena “Tiare”), (Jr. Ch. Stanroph If Maximillion of Terra di Siena x Ch. Simone of Terra di Siena), arrived from Italy, Tiare is a clear princess, dances in the ring, poses as a little lady and she was declared Best Junior of the Granada Show.

We grow and the time returns prices and illusions to us, nothing guives more pride to parents than the victories of his children, nothing fills any more of pride that the victories of those who went away far, and this way we continue enjoying with what we do.